On November 22, 2007, the Human Rights Commission of Pakistan was approached by Mr. Chanser S/o Mr. Balia, and Mr. Khushal S/o Mr. Rama, resident of Janai Goth, District Malir, under the jurisdiction of Gadap Police Station, Karachi, with a complaint that his 30 relatives have been kept as Bonded Laborer for the last one year by a local landlord Lalo Baloch. According to the complainants, Ms. Ambo W/o Mr. Khushal was also gang raped by Lalo Baloch and his colleagues, Mohan Bheel and Nabi Jokhio 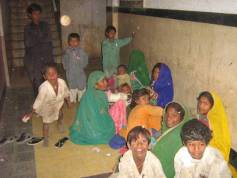 The bonded labour included six women, all of them severely malnourished and in tattered clothes. “The land is owned by one Lalu Baloch. We cleared his land of bushes and did sowing. During the last one year we had two crops. It was agreed that we and the landlord would have 50 per cent share each of the crop but when we asked him to give us our share we were severely beaten and even our womenfolk were thrashed,” Chenesar Bheel, 25, told HRCP.

“The landlord earned Rs. 300,000 from the two crops but he refused to give us our share,” he claimed. In the meantime, Chenesar and another bonded labour Khushan escaped and tried to lodge a complaint at Gadap police station but were not allowed to enter the police station or lodge an FIR.

After discussing the matter with the Vice Chairperson, HRCP, Ms. Zohra Yusuf, letters were written to Mr. Zia-Ul-Hassan Khan, Inspector General of Police, Sindh and Mr. Mir Hussain Lehri SSP, Gadap Town, seeking their help to take prompt action and get these bonded labourers released as soon as possible.

After a continued struggle of 09 days, and follow up with the authorities, finally these 30 bonded labourers were recovered from landlord’s clutches on December 02, 2007.